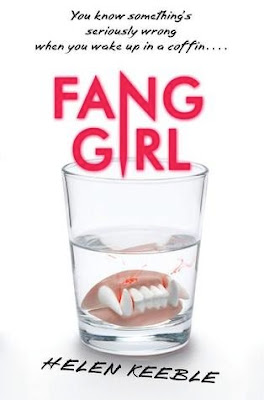 Things That Are Destroying Jane Greene’s Undead Social Life Before It Can Even Begin:

1) A twelve-year-old brother who’s convinced she’s a zombie.
2) Parents who are begging her to turn them into vampires.
3) The pet goldfish she accidentally turns instead.
4) Weird superpowers that let her rip the heads off of every other vampire she meets.(Sounds cool, but it doesn’t win you many friends.)
5) A pyschotic vampire creator who’s using her to carry out a plan for world domination.
And finally:
6) A seriously ripped vampire hunter who either wants to stake her or make out with her. Not sure which.
Being an undead, eternally pasty fifteen-year-old isn’t quite the sexy, brooding, angst-fest Jane always imagined....
Helen Keeble’s riotous debut novel combines the humor of Vladimir Tod with Ally Carter’s spot-on teen voice. With a one-of-a-kind vampire mythology and an irresistibly relatable undead heroine, this uproarious page-turner will leave readers bloodthirsty for more.

Helen Keeble is not, and never has been, a vampire. She has however been a teenager. She grew up partly in America and partly in England, which has left her with an unidentifiable accent and a fondness for peanut butter crackers washed   down with a nice cup of tea. She now lives in West Sussex, England, with her husband, daughter, two cats, and a variable number of fish. To the best of her knowledge, none of the fish are undead.Her first novel, a YA vampire comedy called FANG GIRL, is out 11th Sept 2012, from HarperTeen. She also has another YA paranormal comedy novel (provisionally titled NO ANGEL) scheduled for Sept 2013.

The prize pack includes:
- one signed copy of Fang Girl (can be personalised)
- a voucher for an ARC of Helen's next book NO ANGEL as soon as they are available (likely to be Spring/Summer 2013)
- a cheerful vampire goldfish paperclip
- Fang Girl stickers featuring the cover and quotes from the book

In which Our Heroine, Xanthe Jane Greene (unexpectedly undead vampire fangirl) makes some resolutions for her new unlife…

As a vampire, I solemnly swear I will not:

1) Angst
2) Suck
3) Summon a dark goddess
4) Fall in love with a vampire hunter
a) Or a werewolf
b) Or anyone evil, no matter how hot.
c) Or anyone of species not approved of by my vampire elders, because no one is worth that sort of stress
5) Accept any gifts, give any gifts, carry any messages, take part in any mysterious rituals, etc. etc.

“Here’s another one,” said Mum, sticking a Post-It into the massive tome in her lap. “Running backward while carrying a lit candle in one hand and a live tortoise in the other. Makes vampires flee in terror.”
“Thanks, Mum.” I didn’t bother to look up from my laptop. I’d given up making notes on any of her findings over an hour ago—Eastern European vampire folklore was turning out to be utterly cracktastic. “Can I remind you that we’re looking for ways to stop vampire hunters, not vampires?”
When Mum had said she’d gone to work to get research materials, she wasn’t kidding. Every surface in the living room was piled high with books. This was not unusual, but the familiar physics journals and academic monographs had vanished. In their place: Interview with a Vampire, Dracula, The Vampire in Romanian Legend, Vampire Nation. The Encyclopedia of the Undead, Love Bites, Fourteen Essays on Vampirism, Twilight, Undead and Unwed, Vampires of Stage and Screen, In Search of Dracula . . . everything from huge, leather-bound library reference volumes with cracked spines to shiny new paperbacks with luridly embossed covers. Mum must have checked out every book about vampirism from every library in a thirty-mile radius. I wasn’t quite sure what she was expecting to learn from texts like Marxism and the Vampire, but at least it was keeping her occupied.