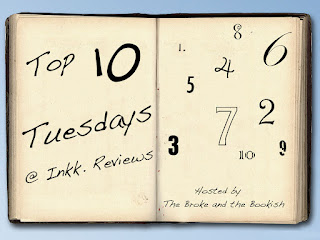 Top Ten Tuesday is hosted by

Broke and The Bookish

This Week's Topic is:

Katie: I just love how much he loves her, on an emotional level he has got to be the sweetest and most thoughtful fictional charracter. If i were Katniss i would not have taken me three books to be with Petta!

Krisha: It took me a minute to separate the books and the movie on this one.  I have a crush on Peeta from the books, not the movie.  Collins described him quite a bit differently.  I think I have a "crush" on him because he always stayed true to who he was.  I respect him for how he handled a tough deck of cards. Real or Not Real?

Katie : yeah.. if you have read the books ( which i have read all ) or even seen True Blood on HBO you would know why.
H-O-T and he is such a bad guy with a hidden heart. i just love him! i have "special " scenes in these books marked. all of those "special scenes" have Eric in them! P.S. I probably could have picked all five of my pics from the sookie stackhouse series, Have you seen the shows ! Alcide, Jason, Bill, Sam.. pretty much every guy in this series makes me blush

Krisha: Two words: Shower scene.  And (once again) I'm talking the book version NOT the lame tv version.  Whew... Is it getting a little warm in here or is it just me?

Katie: I know for a fact that shower scene is in book three.. and super bookmarked in my copy!

Krisha : Tall, confident, and turns into a tiger?  Yes, please!  Quinn has a few steamy scenes with Sookie, too. I think my crush on him is mostly due to the physical description more than anything else.

Katie: The strong silent type. who knows the difference between right and wrong , and willing to make a change. Im pretty sure i would join the Dauntless faction just to be around him ;) and don't forget to check out our Divergent Video Review if you haven't already!

Krisha : Henry tries so hard to stay in the present but is a slave to his time traveling.  He loves Clare and tries to always do right by her.  I love that they can be crazy during the fun times and serious during the hard times.  Here's a quote I saw about the book "a passionate love affair that endures across a sea of time".  Henry the romantic is very crush worthy.

Katie: yup i gotta do it, i don't care how cliché it is, I read Twilight years before the first movie came out.. and i fell in love with this character ! I am team Edward all the way !

Krisha : I love a man who loves animals.  SPOILER: I wasn't a big fan of him getting involved with a married woman but the ending when he took all the animals melted my heart.  And Marlena was the only woman he loved his whole life.  That is very romantic.

Katie:  In a society based around having to be pretty. David saw the beauty in Tally even when she didn't see the beauty in herself. I love David for that! (*spoiler* ) Even after he lost Tally in book one he still hoped that he would find her again. ( maybe he did maybe he didn't ;)  you will have to read the series to find out )


Words from the ladies

It was Katie's choice this week and I liked it even though it was a hard one for me.  I had to do some digging through the bookshelves to relive some swoon worthy moments.  I tried to make my crushes age appropriate, since I'm not a YA.  Katie & I laughed about this while on the phone this week.  I know all my choices but one have shown up on the screen, but I tried not to let that affect my decision too much.  ~ Krisha

I don't know what all the griping is about, i thought this was an easy list.. mine really could have gone on and on! I don't have the same age problem as Krisha does.. i mean that it doesn't matter to me that some of these guys are teenagers, because when i crush on them, i put myself in that girls shoes pretty much. or imagine myself in that situation ( and their age) not how i am now. It is hard to separate yourself from the TV / Movie versions.. but sometimes it helps me imagine the character better, or their impression last longer.  thats why i think those are easier picks.  ~ Katie

Who are some of your top Crushes!
Happy Reading
Krisha & Katie

Posted by InkkReviews at 5:22 AM