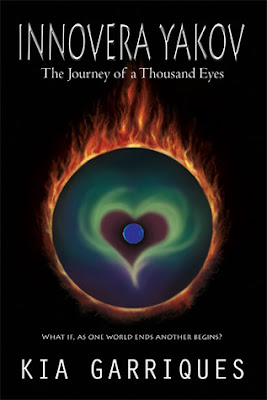 Be prepared to immerse your self in a world where falling in love could cost you your life and nothing is as it seems.

Innovera Yakov – The Journey of A Thousand Eyes is the first installment in an action-packed fantasy drama where characters with powers of healing and destruction live, love, compete and disappear without a trace while they are being prepared for the Journey.

What is the Journey? What happens to the ones who do not return? What unspeakable, stomach-churning things can happen to them there?


Even Ayana the Great Healer, Krave ‘The Golden One’ and the powerful Blu Tara are terrified of it.

Kia Garriques studied writing and English literature at University and has been a published short story writer since 2009. Her first story “The Invisible Alien Watcher” was published by Micro Horror in 2009 and reprinted by Pill Hill Press in 2011. Innovera Yakov: The Journey of a Thousand Eyes – is her first novel in the ‘Worlds’ series and will be out on amazon mid February. visit www.kiagarriques.com/books to read the first chapter.

One E-book Kindle copy of Innovera Yakov is up for grabs. Interested ? Leave a comment on this post and let us know what you think. Thats it!! Winner will be chosen at random from the comments below on April 20th.

Also, Tour sign ups are live at Xpresso Book Tours, so if you want to take part in the Innovera Yakov : The Journey Of A Thousand Eyes Book Tour, Click HERE for more info!