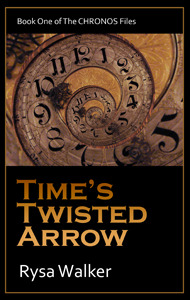 "Sharp writing, a flair for dialogue and a big, twisting imagination." - Kirkus Reviews.
They weren't panic attacks. Of that, seventeen year old Kate is certain, no matter what the shrink told her parents. But it's even harder to accept the explanation offered by her terminally ill grandmother - that Kate has inherited designer DNA from the time-traveling historians of CHRONOS, who were stranded in the past by a saboteur. Kate knows that her grandmother's story could easily be the brain tumor talking, but that doesn't explain the odd medallion or the two young men - one of them hauntingly familiar -- who simply vanish before her eyes on the subway. It doesn't explain Trey, the handsome stranger who now occupies Kate's assigned seat in trig class. And it definitely doesn't explain why Kate is now in an alternate timeline, where leaders of a previously unknown cult hold great power and are planning a rather drastic form of environmental defense.
In this new reality, Kate's grandmother was murdered at age twenty-two on a research trip to the past, which means that Kate's mother was never born, her father doesn't know her and, for all intents and purposes, she doesn't exist. The only thing keeping her from disappearing entirely is the strange blue medallion around her neck, and the only thing keeping her sane is her burgeoning relationship with Trey. To restore the time line, Kate must travel back to 1893 and keep herself and her grandmother clear of H.H. Holmes, the serial killer who is stalking young women at the Chicago World's Fair. But that choice comes at a price - she'll remember the past few months with Trey, but when he looks at her, he'll see a total stranger. 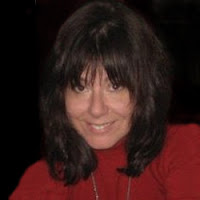 RYSA WALKER grew up on a cattle ranch in the South. Her options for entertainment were talking to cows and reading books. (Occasionally, she would mix things up a bit and read books to cows.) On the rare occasion that she gained control of the television, she watched Star Trek and imagined living in the future, on distant planets, or at least in a town big enough to have a stop light. When not writing, she teaches history and government in North Carolina, where she shares an office with her husband, who heroically pays the mortgage each month, and a golden retriever named Lucy. She still doesn't get control of the TV very often, thanks to two sports-obsessed kids.

An E - Book copy of Time's Twisted Arrow is up for grabs! all you have to do is leave a comment! Thanks right, just leave a comment, let me know what you think ! Winner will be chosen at random from the comments below on March 10th .


Excerpt from Chapter 3
∞
He spoke in a low whisper.  "Give me the backpack and you can walk away.  I don't want trouble.  Just pull it off your shoulders and give it to me."
I would normally have just given it over, no questions, no hesitation.  Lesson one of self-defense is that you don't argue with the man holding the gun.  But the diary was in there.
Pudgy's face was suddenly inches from mine and I felt a crushing pain in my toes as his heel ground into them. He whispered into my ear, "I can shoot you and be gone before anyone knows what happened."
"Doors closing.  Doors closing," the automated voice chimed, as Pudgy pulled me with him toward the door.  The foot that had just mangled my toes slipped into the opening to prevent the subway doors from sliding shut.  I glared at him, then slid the backpack from my shoulders and handed it to him. As he squeezed his chubby frame through the door, he pushed me backward into the train, hard.

I fell against two other passengers.  One had on earphones and had missed the entire exchange.  He just looked annoyed at my clumsiness, but the woman had clearly been watching. She held a large paper sack in her lap, and my right hand was crumpled into the side of it.  "Are you alright?" she asked. "Should I call security?"
"Kate!" The voice from behind me was deep and the slight accent unfamiliar, but I knew who it was before I turned. My first instinct was to run—not that there was really anywhere to go in a closed subway car—but as he moved closer, I glimpsed a familiar blue light shining through the fabric of his shirt.   He reached out to take my arm and pulled me toward a seat a few aisles away, out of earshot of the woman who had offered to help.
I sat, but then whirled to face him.  "Who the hell are you?  Why are you following me and why did your friend take my pack?  And how did you get that from my grandmother?"  I poked the spot on his shirt where the light of the medallion showed through.
He paused for a second, processing the barrage of questions, and then gave me a small, slightly crooked smile. "Okay—I'll answer them in order. I am Kiernan Dunne," he said.  "I was not following you. I was following Simon.  I'm not supposed to be here. Simon—the guy who took your bag—is not my friend, Kate.  And this key," he finished, pointing at the medallion on his chest, "is not from your grandmother's collection.  It was my father's."
He raised his hand and I flinched instinctively.  His eyes grew sad and his smile twisted ruefully, as he moved his hand, more slowly now, to brush the right side of my face with his fingertips.    "I've never seen you this young."  He reached around and pulled the band loose from my hair, so that it fell to my shoulders.  "Now you look more like my Kate."
I opened my mouth to protest, but he held up his hand and continued, speaking more quickly now.  "We are close to your exit.  Go straight to your grandmother's house and tell her what has happened.  At least you still have this." He touched the black cord around my neck. "Keep the CHRONOS key on you at all times."
"CHRONOS key?  I don't have…"
"The medallion," Kiernan said, again touching the cord.
"I don't have a medallion."  I pulled the cord out of my blouse—at the end was the clear plastic holder that contained my school ID, a Metro pass, a few pictures and two keys, one for Dad's cottage and one for the townhouse.  I flipped the holder around so that he could see the plain silver keys through the back. "And these are the only keys I have.  Could you stop talking in riddles?"
The color drained from Kiernan's face and panic filled his eyes.  "Was it in the bag?  You should keep it on you…"
"No," I repeated.  "I don't have a medallion.  Until now, I thought there was only one and to the best of my knowledge it is at my grandmother's house."
"Why?" he asked. "Why in bloody hell would she send you out with no protection?"
"I don't know how to use it!  Yesterday, I nearly…" I blushed, thinking back to the scene in the kitchen.  "I saw you when I held it. Why? Who are you?"
The train began to slow.  Kiernan closed his eyes and rubbed his first two fingers against his temples for a few seconds before looking up and shaking his head. "I didn't plan for this, Kate.  You are going to have to run.  Take a cab. Steal a car. Whatever you do, get to her house as quickly as you can and do not leave."
He moved us both toward the doors and then turned, pulling me toward him.  "I will try to stall them—but I don't know exactly what they are planning, so I have no idea how long you have."
"How long before wha—"  My question was silenced as his lips met mine, gentle, but urgent.  My body was swept with the same sensations I had felt earlier when I held the medallion—heart pounding, unable to breathe, unable to move, unable to think.
After a moment, he pulled away, a small smile lifting the corners of his mouth. "This was not supposed to be our first kiss, Kate.  But if you do not hurry, it will almost certainly be our last.  Run.  Run, NOW."  As the train decelerated, Kiernan reached into his shirt and closed his hand around the medallion. The dark green band that he had pulled from my hair was now on his wrist.  And then he vanished.
The woman with the paper bag was staring, her mouth shaped in a large, comical "O," but no one else seemed to have noticed that Kiernan had simply disappeared.
The subway doors chimed open and I ran.


Check out the rest of the Tour at Xpresso Book Tours