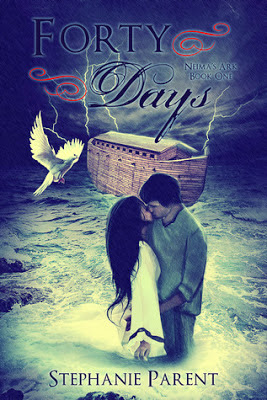 The entire village knows Neima’s grandfather is a madman. For years the old man has prophesied that a great flood is coming, a flood disastrous enough to blot out the entire earth. He’s even built an enormous ark that he claims will allow his family to survive the deluge. But no one believes the ravings of a lunatic…
…until the rain starts. And doesn’t stop. Soon sixteen-year-old Neima finds her entire world transformed, her life and those of the people she loves in peril. Trapped on the ark with her grandfather Noah, the rest of her family, and a noisy, filthy, and hungry assortment of wild animals, will Neima find a way to survive?
With lions, tigers, and bears oh my, elephants and flamingos too, along with rivalries and betrayals, a mysterious stowaway, and perhaps even an unexpected romance, FORTY DAYS is not your grandfather’s Noah’s Ark story.

FORTY DAYS is approximately 45000 words, the length of a shorter novel, and is the first installment in a two-part epic story. It does contain a cliffhanger ending.
Readers looking for a traditional, religiously oriented version of the Noah’s Ark story should be warned that FORTY DAYS may not appeal to them. The novel will, however, appeal to lovers of apocalyptic fiction, historical fiction, and romance, as well as anyone who’s ever dreamed of having a baby elephant as a pet. 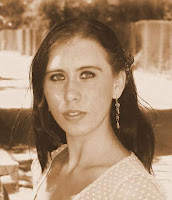 Stephanie Parent is a graduate of the Master of Professional Writing program at USC and attended the Baltimore School for the Arts as a piano major. She moved to Los Angeles because of Francesca Lia Block's WEETZIE BAT books, which might give you some idea of how much books mean to her. She also loves dogs, books about dogs, and sugary coffee drinks both hot and cold.

After you Comment and enter here.. check out Stephanie's Blog , she is also hosting a Giveaway for a $20 Gift Card! so go check it out!


cottages were submerged, our animals drowned, though I can’t recall who told me, or whether I simply overheard the gossip. But I will never forget the way I tore through the village, heading straight for my father at work in the smithy, and I will never forget how I ran inside without calling out first, even though I was forbidden to do so.
Father was pouring molten bronze into molds, but to my young mind and eyes, it was as if he held liquid fire just a few hands’ breadth from his body, at the end of a long, precariously thin wooden handle. If he was a more excitable man, a less steady one, there might have been a terrible accident. As it was, the worst I received was a scolding once Father put the smoking-hot pot down on the smith stone and led me back outside, away from the open flame and molten metal. And even his reprimand was light, once he realized how frightened I was; he never could be harsh with me. I remember how he gathered me in his arms, so close that I rested my cheek against the warm leather of his apron and breathed in the smoky residue that lingered there. He told me that there would be no flood, that old Noah wasn’t right in the head, though I should never say so aloud.
“But how can you know?” I whispered into his chest. He breathed out, long and deep, and I bit my lip as I waited for him to speak. “I suppose nothing in this world is certain,” he said at last. “But I promise that if you, if any member of our family is ever in danger, I’ll do everything I can to protect you.” Now, as I wash Father’s tunics in the river, I realize I can’t remember the last time I visited him at the smithy, or even exchanged more than a few words with him over supper. The ark has kept him busy, I suppose. It takes me a minute to notice Derya is no longer chattering beside me, and I crane my neck to see her standing beside Jorin, facing away from the river. “Can you imagine,” she says softly, “all of this, just…gone?”
I turn and follow her gaze, taking it all in: the mud-brick cottages, the bits of straw
embedded in their walls and roofs gleaming golden in the sun; the fields of wheat and barley,
low and parched now that the harvest has ended; the pens of grazing goats and cattle and sheep; the forested hills that cup our valley in their protective hands. It may not be much, in the scheme of the wide world I’ve heard tales of but never seen, and I may not always feel welcome here. But this is the only home I’ve ever known, and no, I cannot imagine it destroyed.

Posted by InkkReviews at 8:29 AM