REVIEW: The Book of Lost Things By John Connolly 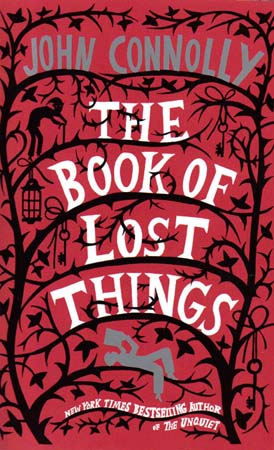 
Buy The Book of Lost Things on Amazon

High in his attic bedroom, twelve-year-old David mourns the death of his mother, with only the books on his shelf for company. But those books have begun to whisper to him in the darkness. Angry and alone, he takes refuge in his imagination and soon finds that reality and fantasy have begun to meld. While his family falls apart around him, David is violently propelled into a world that is a strange reflection of his own -- populated by heroes and monsters and ruled by a faded king who keeps his secrets in a mysterious book, The Book of Lost Things.

Taking readers on a vivid journey through the loss of innocence into adulthood and beyond, New York Times bestselling author John Connolly tells a dark and compelling tale that reminds us of the enduring power of stories in our lives.

I think this is the BEST UNHEARD OF BOOK EVER!! I stumbled upon this book in 2008, wondering the isles of Books-A-Million. This amazing cover caught my eye (and unfortunately I do judge a book by its cover sometimes). What a great plot! Seriously this book is my hidden treasure, if you only read one book that I recommend, than read this one!


Our main character David stumbles upon this entrance to a magical world. He tries to find his way back home and his told he has to go see the kind and his “book of lost things”. On the way to see the king, David meets a lot of speed bumps along the way; Trolls, Lupes, Hunters, Snow White and the 7 dwarfs, Village eating monsters, and of course the Crooked Man (a rumplestiltskin (spelling unknown) type of character, just to name a few.

*TV / Movie Comparison : I told you, I watch too much TV!  If you like ABC’s Once Upon a Time, or Narnia, Pans Labyrinth, or any other “get sucked into another world, and I’m on a journey “ show or movie than YOU WILL LOVE THIS!

I don’t know how else to praise this book, and frankly and super surprised it hasn’t become a movie by now!

I have lost count as to how many times I've re-read Book of Lost Things.  It's that amazing.  I like that years later, Katie and I still talk about this book.  It helps to remind me of why we started this project.  It's a longer book than most that we read with 480 pages in the edition we both own.  Although this book is about a 12 year-old boy and includes some well known fairy tale characters, this is NOT a children's book by any means.

To start with, there is an entire chapter dedicated to just the awful things that the crooked man has done to others.  Sometimes I skip that chapter because it creeps me out so bad. But that's the point, I guess.   I wonder that if I had read this book as a teenager if it would be as special to me.   I can figuratively translate some of David's journey into my own life.  I keep this book on my nightstand and I recommend everyone owning it in print.

Posted by InkkReviews at 2:19 PM

Email ThisBlogThis!Share to TwitterShare to FacebookShare to Pinterest
Labels: Reviews