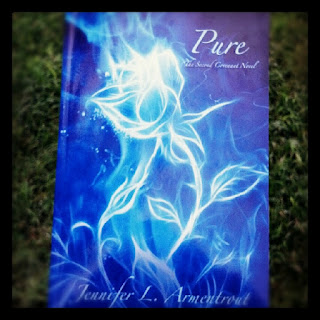 
There is need. And then there is Fate...Being destined to become some kind of supernatural electrical outlet isn’t exactly awesome—especially when Alexandria’s "other half" is everywhere she goes. Seth’s in her training room, outside her classes, and keeps showing up in her bedroom—so not cool. Their connection does have some benefits, like staving off her nightmares of the tragic showdown with her mother, but it has no effect on what Alex feels for the forbidden, pure-blooded Aiden. Or what he will do—and sacrifice—for her.When daimons infiltrate the Covenants and attack students, the gods send furies—lesser gods determined to eradicate any threat to the Covenants and to the gods, and that includes the Apollyon... and Alex. And if that and hordes of aether-sucking monsters didn’t blow bad enough, a mysterious threat seems willing to do anything to neutralize Seth, even if that means forcing Alex into servitude... or killing her.When the gods are involved, some decisions can never, ever be undone

Katie’s Thoughts:
Let me just say… so good! I know I was a bit worried after reading the first Novel in the Covenant Series (Half Blood), but Armentrout knows what she is doing. The characters have really come along way since book one, and I really got invested in them…  even caught myself sheding a tear or two, seriously!
I think this book can totally stand on its own with out having to be compared with other Greek mythology books such as Rick Rordians’ “Percy Jackson and the Olympians”. As far as the Alex, Aiden & Seth love triangle goes.. This really has got to be the first time that I read a book with this scenario that honest to “gods” I can’t choose who I want Alex to be with.

*TV Show Reference*I’m sorry in advance, because I am sure I will constantly be comparing books to TV shows or movies, but if you watch “Vampire Diaries” on the CW  then you will know what I mean. I really like both boys, is that so bad.. can’t she just have them both?!

Anyways, I am really interested in where this book is going, not only do I want to see who she ends up with, but I am very interested to see where this plot will lead, especially with Alex and her impending transformation into an Apollyon on her 18th Birthday. Will they change the breed order so that half bloods and pure bloods can be together (Alex  & Aiden)? Who knows, but I am ready to find out!
I will definitely be reading book three of the Covenant Series “Deity” Coming in October 2012 from Spencer Hill Press.

Posted by InkkReviews at 7:03 PM

Email ThisBlogThis!Share to TwitterShare to FacebookShare to Pinterest
Labels: Reviews