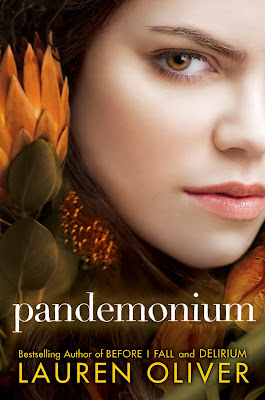 I'm pushing aside the memory of my nightmare,


pushing aside thoughts of Alex,


pushing aside thoughts of Hana and my old school,


The old life is dead.

But the old Lena is dead too.
I buried her.
I left her beyond a fence,
behind a wall of smoke and flame.


Pandemonium picks up right where Delirium leaves off, Lena is found in the Wilds by Raven, and taken to a nearby homestead with other Invalids. After a period of time in the Wilds, Lena joins the resistance and goes into the city undercover, much like what Alex did in Delirium. The story is not told in a traditional Linear fashion, each chapter jumps from "then" ( when Lena was found, and living in the wilds ) to "now" (Lena working as an undercover resister within the city walls.)

I was not a huge fan of the whole " Now / Then" skipping back and forth. It was done with purpose  and thoughtfully written, I personally however am not a fan of that many flashbacks, i found my self aggrivated at times, especially when i was super into the "now" parts.

That being said, this novel was wonderfully written, Lauren Oliver has mastered the art of Cliffhangers!      Just when you thought that the end of Delirium couldn't be topped with it's to-die-for suspensefull ending, somehow Oliver manages to make the end of Pandimoneium even more jaw dropping ( seriously you should have seen my face! I could tell what was going to happen, i saw it comming from a couple of chapters  away.... but yet.. my jaw couldnt help but drop!

This was me when i figured out what was going to happen  .....


and even though i knew, I KNEW what the outcome was going to be ...

This was me at the last sentence of the book! ...


*SPOILERS*
Do not read any further unless you have read Pandemonium, in that case read away and give me your input!

This seems to be a big question, but its not really a big question for me. I am team Adam all the way. I understand why people like Julian, heck i like Julian, he's a nice guy, however Lena wants Alex and would choose him if it wasn't that she think he is "dead".  I understand why Lena loved Alex, it was a well built relationship.  Alex would die for Lena literally. What Lena had with Julian was great , was it love? I don't know , it was quick, and in my opinion Julian was her rebound. Constantly throughout the book she kept comparing him to alex. Julian is a great guy, and i would have gone back to rescue him too... but lets be real .. she is who she is now because of Alex.. I think the main question now is, what has become of Alex, and how have the things he has been though changed him!

I enjoyed Pandemonium, but it did have symptoms of "the second book in a trilogy". I am however looking forward to Requiem, and i can't wait to find out what happens! most especially with my guy drama! i know some of you get tired of the whole love triangle business , but with out the love story, we really wouldn't care who wins in this war, love is the reason worth fighting for !

If you didn't get to see it before, Check out my Video review of Delirium

Check out the other book in the Delirium Series

Posted by InkkReviews at 1:00 AM